Business Soaring After Moving to Nagoya, the Center of the Japanese Automobile Industry

Q. Please tell us a little about your business.

TÜNKERS JAPAN Co., Ltd. is a Japanese subsidiary of TÜNKERS, a German industrial equipment manufacturer. A traditional company founded by the Tünkers family in the 1970s, TÜNKERS manufactures and sells clamps, grippers, transport systems, rotary tables, and so on used in automotive manufacturing plants. TÜNKERS is already highly regarded in Europe and North America, boasting a considerable market share. Customers include automobile manufacturers and primary contractors.

For example, the weight that a robot at a plant can carry is fixed, so when we look at grippers, we want to make the equipment as light as possible. Because TÜNKERS’ grippers are made of aluminum, they are lighter than existing iron grippers.

In Japan, the TÜNKERS name is well-known to few, making wider name recognition and sales volume a future goal. At the moment, we have narrowed down the products that we expect to be in demand in the domestic market. We are working on expanding sales and plan to gradually increase the number of products we offer.

Q. How did you decide to expand into Japan?

Japan is home to world-renowned car manufacturers, making it an enormous and attractive market for us. But in the past, there was no impetus for the move to expand into Japan. Then, a manager at a trading company in Fukuoka imported and sold our products. In Germany, they decided TÜNKERS products might sell in Japan, so they made the decision to enter the market in 2016. We headhunted that manager and established a Japanese subsidiary in Fukuoka.

Q. What was the reasoning for later moving to Nagoya?

The German headquarters had the idea of placing TÜNKERS products on the factory lines of a major automobile manufacturer in Japan. To do so, it was decided that we should join the center of the automobile industry in Japan, and we decided to move to Nagoya two years after entering Fukuoka.

We headhunted the manager in charge of handling our products at a Chinese consulting company, making that person our GM in Japan, and established our Nagoya office. Initially, however, there was no physical office, and it seems that the GM spent time at coffee shops with Wi-Fi, working from morning to night. Many of our business partners have staff who speak English, so it seems that being a non-Japanese GM helped build friendly relationships with many of them. TÜNKERS is a well-known brand in Germany, so there were also those who already knew our name when they heard we would expand into Nagoya.

Q. What has made you glad to have moved to Nagoya?

The automobile industry in the Chubu region is on a different scale. In addition to Toyota Motor and Mitsubishi Motors in Aichi Prefecture and Honda Motor Co., Ltd. in Mie Prefecture, there are many suppliers as well as companies that produce automotive manufacturing equipment in the region. With so many manufacturers competing in the region, the benefits are immeasurable for us as we seek to win orders for automotive manufacturing equipment. The possibilities of the region are still unfolding, as there are plenty of companies we do not yet know.

And although the number of remote meetings has increased recently, sales are still very much based on meeting and talking face-to-face with customers. The central location of Nagoya within Japan and infrastructure such as the Shinkansen, airplanes, and highways make it an extremely attractive location. It affords easy to access the Kanto, Kansai, and Tohoku regions as well as the island of Kyushu and so on.

The Kanto region is home to many of our customers, too. Nagoya’s close proximity and infrastructure make the Kanto region easily accessible. While I do at times ride the Shinkansen and airplanes, when bringing samples with me, I go by car. Car companies are generally far from the city center, so cars are often more convenient. I’m grateful for all of the highway infrastructure in place.

It is also an advantage to be able to contact our countless customers in the Chubu region when needed. Customers who have been with us for a long time often praise us for our improved adaptability and responsiveness. There seems to be a sense of security that we will be able to respond right away if something goes wrong when our business cards say we are located in Nagoya.

Q. What do you think of the temperament of people in Nagoya you encounter in your sales work?

Nagoya tends to be thought of as exclusive, but it is in fact the opposite. In fact, I think the ingrained culture of continuous improvement means companies actively adopt positive advances. Customers are strict when it comes to quality and price, but once you gain their trust, it’s possible to build long relationships.

In many cases, the decision-making authority on product adoption at companies is found in or near Nagoya, so gaining trust there can mean quick expansion elsewhere. A strategy is important because it is difficult to expand without those key persons and model factories. We’ve finally reached the stage where the number of inquiries we receive is increasing. Companies ask to meet with us after learning of our products in use at other factories.

A smooth launch with government support.

Q. How was the support from the city of Nagoya when moving?

The office of the Greater Nagoya Initiative Council helped us with our launch, demonstrating great attention to detail. They provided us with information on the Subsidy for the Promotion of Advancing into City of Nagoya for Foreign Companies and introduced us to real estate companies as well as judicial scriveners. This detailed support was very helpful. Establishing our office felt very easy as a result. After opening the office, we initially had no sales, and the subsidy was a lifesaver, as we were relying on remittances from Germany at the time.

*The Greater Nagoya Initiative Council (GNIC) is an organization that provides comprehensive support to foreign companies wishing to advance into or expand their business in the Greater Nagoya area, helping them to do so in a smooth manner. The GNIC provides support to assist with the launch of foreign companies in the city of Nagoya as well as Aichi, Gifu, and Mie Prefectures.

Q. What goals do you have for the future?

It's only recently that our sales have increased. I think we can safely say that our move to Nagoya has been a success. We currently have only two employees, so I would like to increase the number of employees and expand our business. The large population in Nagoya means I’m positive about hiring talented personnel going forward. 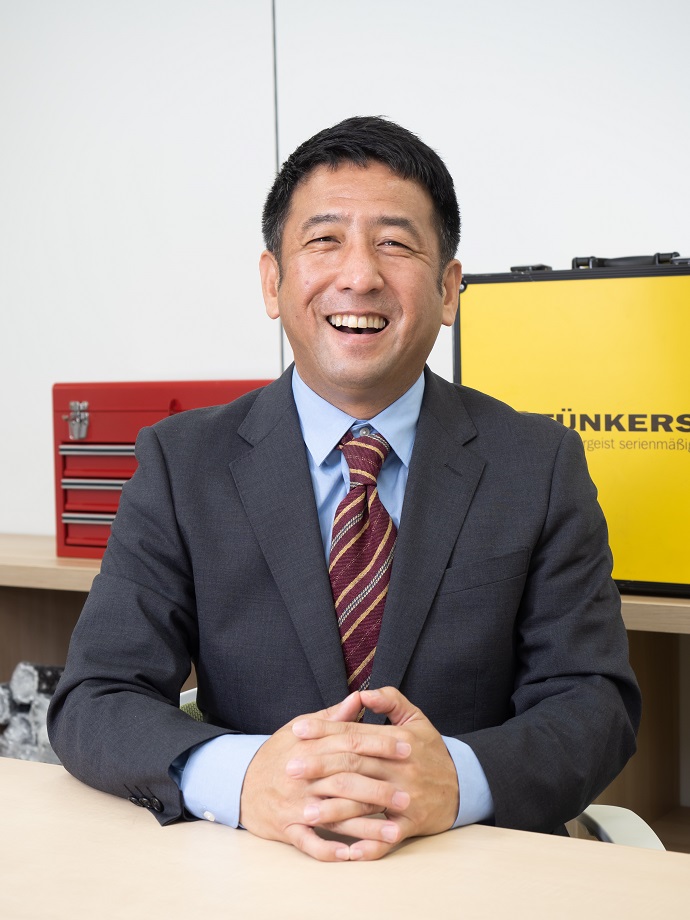 Sugiura worked at a trading company that handles automobile parts from 1996 to 2009. He joined German cable manufacturer LEONI—with whom he originally did business in his previous position—after being headhunted when LEONI launched a Japanese subsidiary in 2010.
At LEONI, Sugiura was involved in the sale of electric wires to automobile manufacturers in the Chubu region.
In 2019, he joined TÜNKERS Japan Co., Ltd.
Sugiura is putting to use his skills in Nagoya, utilizing his experience and thorough knowledge of the automobile industry in the Chubu region.